Never Give a Wizard a Glow-Stick 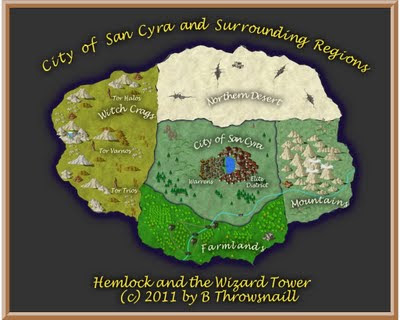 I was like Will Farrell on ecstasy, jamming on a glo-stick at a rave. I realized tonight that I went nuts with the glow effect on my map. So, in a rare exercise in restraint, I've gone back and removed most of the glow.

Initially I was just thrilled that the map didn't look terrible. Now I'm starting to look at it more objectively. It doesn't really look like a hand drawn scroll map, which seems to be the best look that I've seen for fantasy maps. It has a semi-"Legend of Zelda" vibe going on. Maybe not a bad thing, but I've seen better. I may go back to the drawing board and see if I can do something in Campaign Cartographer's vector mode. Trouble is, the out of the box vector "clip art" selection seemed weak to me. And I was hoping to resist going nuts with the add-ons.
Posted by B Throwsnaill at 9:37 PM