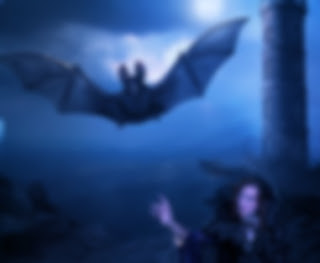 Early work in progress images for the cover of Hemlock and the Dread Sorceress are starting to arrive in my mailbox (teaser at left).  It's always a thrill to open up a new revision and see it getting closer to the final product.  It's also a tangible sign that a new novel is really on the horizon.  A novel may ultimately be a collection of words, but a cover somehow makes it seem more tangible--even in the case of an eBook.

I am continuing to get amazing ideas for the final part(s) of the Maker's Fire series.  At this point I am seeing one more book in the series, but who knows--it could be two.  The idea I got today was really amazing.  As I imagined it, I had that simultaneous feeling of pride and humility that often accompanies what I consider to be my best concepts.  I feel that I am not creating these ideas but channeling them from some higher order.  It may sound far fetched, but that's how I feel about my process.  So there is humility, but my ego is still sated in the process.  I do experience pride at being the "vessel" for a good concept.  But, oh woe is me, the idea I had today is still so far along in the story.  I am anxious to get to it--but I don't like to write scenes out of sequence if I can avoid it.  I'll just have to keep writing, and try to get to it as soon as I am able.

This idea I got today strikes me as being more profound than most because it ties in to some dream images that I've been experiencing for years.  Could this story have been connected to me for all this time and only now manifesting?  I'm trying to stay somewhat grounded here, but the magnitude of this latest idea, and the sense of catharsis that it's producing are really significant.  If I'm not destined to be writing these books at this time, in this place, and in the way I'm going about it then I must be really self delusional, because it is proving to be an amazing journey.

I'm still struggling with the price point for Hemlock and the Dread Sorceress.  My two choices seem to be: a) price at $1.99, which would seem to be a fair price given the shorter length, but will likely produce a net loss (after cover art and editing) at the lower Amazon profit margin, or b) price at $2.99 and risk alienating readers who purchased Hemlock and the Dead God's Legacy, which is nearly twice as long as Dread Sorceress, at the same price.  When in doubt, I think it's best to side with the reader, so option a) is in the lead.  Another option would be to price at $2.99 on Amazon and $1.99 on other outlets through Smashwords.  Perhaps that is the best option, although it's kind of bending Amazon's publishing rules.

Thanks for reading, and I hope you are doing well!

Posted by B Throwsnaill at 7:25 PM No comments:

Hemlock and the Dread Sorceress 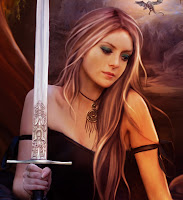 I've been dutifully writing over the past few weeks, and wrapping up the first draft of the new novel.  The title is going to be "Hemlock and the Dread Sorceress: The Maker's Fire, Book III, Vol I".  Quite a mouthful, huh?   It looks like the word count is going to come in at a little over 40K words.  So, as I've mentioned in previous blog posts, it's going to be a shorter work.  What can I say about this new book without giving anything away?  How about revealing a first draft of the synopsis!

Hemlock has retreated back into the shadows of the Warrens, content, for a time, to let events come and go as they may.  But she knows that a new enemy is returning to the City: a titan of the past who intends to wrest control from Gwineval and the wizards.  When word reaches the City that the rogue wizards have moved against the eastern mountains, it becomes clear that DuLoc's campaign has begun--even if the man himself has not yet arrived.  Gwineval marshals the forces of the City to resist DuLoc's plans, but Hemlock feels she must take another path.  She makes a radical decision to forgo the initial campaign in order to pursue what she hopes will be a greater boon.  But she doesn't anticipate that another dark presence stands between her and her goals.  She must face this unanticipated foe in order to advance her plans to save the City.

I've contacted the cover artist and plans are in place to start work on the cover toward the end of April.  Assuming I can complete and edit the first draft by the end of May, I hope to release the book sometime in the beginning of the summer.  I hope readers are as excited as I am about this release.  It's funny how every novel I've written so far feels different.  This one is shorter than Dead God's Legacy, and for the most part it is more focused.  This is the first novel in the series that does not use the flashback structure, and therefore it is much more of a straight ahead adventure than the past novels have been.  I've really enjoyed writing this novel and I can't wait to share it with you!

Posted by B Throwsnaill at 9:31 PM No comments: