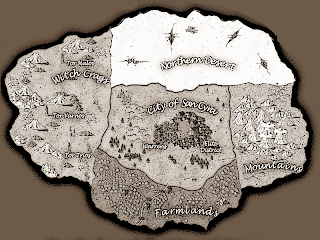 This is a map of the City (officially called San Cyra, although mostly referred to simply as "The City") and its surrounding regions.  Note that the depiction of the City is not to scale.  This map reflects the regions as they exist at the beginning of Hemlock and the Wizard Tower.  Click on the map for a larger version of it.