The Spice Must Flow! And Pass the Chips... 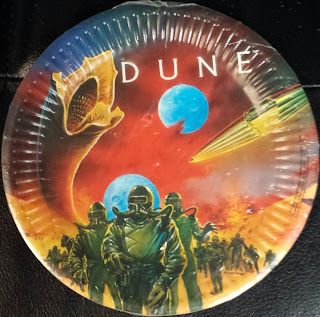 I recently went to a small convention featuring 70s and 80s pop culture.  It was pretty neat.  There was the whole cosplay thing, which I'm really not that interested in--but I do have to admit that the people in costume add to the overall ambiance quite a bit.  And then there were the vendors peddling ancient artifacts from these lost decades.  I purchased a few items.  First, I bought a box containing someone's old Dungeons and Dragons collection.  I only intended to buy one book, but the guy insisted on selling the entire box together.  I looked over everything in the box and made a reasonable offer which he accepted.  It was a pretty good haul with some nice 1st edition books, a really nice 1st edition DM screen and even one of those character folders with the blue adventure logs.  I suppose I could auction off some of the stuff, but at least D&D books don't take up a lot of space.  I also purchased some Dune snack plates that were clearly a tie-in to the 1983 David Lynch film.  I love Dune, so I found the idea of Dune snack plates to be strangely irresistible.  "Father, the sleeper has awakened!  And he wants some Doritos!"  They were even in shrink wrap that appears to be original.  Looking at the fine print on the plates I can see the image was licensed from the Dino De Laurentis company and the plates were produced by Merchandising Corporation of America, Inc.  The power of the Schwartz at it's finest!

On the writing front, I've started working on the next Hemlock book, but I'm taking it relatively easy.  I need to build up some writing "mana" after the push to finish Book Three.

I'm currently reading "World Without End" by Ken Follet.  It's a pretty good book so far and I admire his writing a lot.  My only comment is it reads a little bit like an HBO series screenplay in that there's a surprising amount of graphic sex popping up at regular intervals--more than in any book I've read in recent memory.  OK, so maybe reading history books and books about finance and mathematics mean I lack perspective on what the sexual content of a modern novel is like.  And I haven't read 50 Shades of Grey or anything like that.  Still, it's surprising me a bit since I didn't recall that type of content in the book's predecessor ("Pillars of the Earth").

I'm sorry about the short post this month.  I will try to post more frequently as time and inspiration allow.  And thank you for your support of my new release: "Hemlock and the Dread Sorceress"!

Posted by B Throwsnaill at 6:06 PM