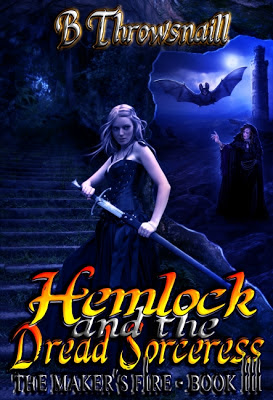 Here is the cover art for Hemlock and the Dread Sorceress!  As you can (hopefully) tell, Elena Dudina has outdone herself again!

I fully completed the first draft of Hemlock and the Dread Sorceress yesterday.  I had completed what I'll call the core narrative several weeks before, but I had an idea for an additional chapter to help flesh out the novel.  As often happens, the writing took on a life of its own, and I can safely say that this "bonus" chapter is now one of my favorite in the book.  I noticed something while writing this chapter--which consists of a battle and the events leading up to it.  Battle sequences are exhausting to write!  I tend to imagine them at breakneck speed, so I am usually typing as fast as I can trying to keep up with my thoughts.  I'm sure my writing gets a little more streamlined during these sequences because of the pace, but I suspect that probably helps the reader get more in sync with the tempo of the rapidly unfolding events.

I've continued to have little ideas here and there that have really added to the novel.  It's amazing how a random idea will come to you, and then you realize that it just fits with the rest of the story like a puzzle piece slipping into place.  A puzzle piece you didn't even know existed until that moment!  I think these experiences are what keeps me writing--it's just a rally rewarding feeling to "architect" these stories.  Especially when you consider that the blueprint for the story is usually blank!  It's magic!

The tasks remaining before publication of Book III are the following:  beta reader input, editing, layout, and updating the map.  There are quite a few items to complete, but none of them are herculean tasks.  One task that I'm kind of dreading is updating the map.  I am using software called Campaign Cartographer, and I since I only use it once every eighteen months or so, I tend to forget how to use it in the interim.  And let's just say it's not the most intuitive software out there.  Fortunately, I left myself some notes after I struggled up the learning curve for Dead God's Legacy.  We'll see how effective those notes are, and whether I end up pulling more hair out this time around.

I'm in that anxious period awaiting feedback from beta readers.  I am bouncing back and forth between feeling sky high about the novel and then coming back to earth and hoping it's not X, where X is whatever insecurity about my writing I happen to be indulging in at the time.  Am I right on track with this first draft, or is there a serious flaw like there was in the early draft of Dead God's Legacy?  Only time and the generosity of my beta readers will tell.  If the manuscript is right on track then I expect to release sometime in July.  If there are re-writes required then it could be delayed, but rest assured Book III will release this summer.  Word count is sitting at 53K now--short by fantasy standards.  It will be priced accordingly at $1.99.  I'm taking the profit margin hit (books under $2.99 only net 33% on Amazon instead of 66%) because I want to make sure people don't feel cheated by the shorter length.  Despite the length, I think it's a rousing adventure tale with a few epic events sprinkled in for good measure. I hope you're having a great start to summer, and thanks for reading!

Posted by B Throwsnaill at 2:18 PM