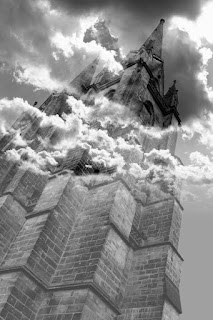 I'm writing this blog post from inside the Wizard Tower.  It's an imaginary place, of course--a place where I might see a wizard stroll by; or hear the call of an exotic animal echoing through the halls, as it is the subject of some bizarre, magical experiment.

So, as I sit here imagining myself in a tower, how do I feel?  Empowered? Protected?  Isolated?  I look out over the teeming City and the sense of height is palpable.  Here the concept of governance leaves the realm of the abstract as I watch the people going about their daily activities like ants in a hive crossection.

I'm fascinated by towers.  And Hemlock and the Wizard Tower is a novel about toppling towers.  In the figurative sense, it's about perceiving the people who occupy elevated positions of power, determining that they are hostile or even evil, and then destroying the source of their power.

I got to thinking about the upcoming sequel to Hemlock and the Wizard Tower in terms of this theme, and my conclusion is that this new book (Hemlock and the Dead God's Legacy) is actually about building towers.  Because in a revolution it's not enough to simply want to change something.  There has to be a vision of what to replace it with.  And that's often much more difficult than the act of destruction.  At the end of a revolution the proverbial slate has been wiped clean, and a new regime has been handed the chalk.  What will they do with it?  This is one of the ideas explored in Hemlock and the Dead God's Legacy.

Another theme is...well...Gods themselves.  I received a tweet from a pastor this week which contained a gentle rebuke for the title of the new novel.  He wrote, "gods may die but God never does."  I didn't respond because I didn't see a point--I don't see Twitter as an ideal platform for an idealogical debate.  And the intersection of religion and fantasy has been examined and documented in great detail.  If he doesn't understand or appreciate that, then I doubt my 120 character response will change his point of view.  I will say this about my novels:  they are not explicitly religious, but they are explicitly spiritual.  The characters in my stories care deeply about their lives and their world.  Many of them have strong feelings of responsibility and altruism.  Some are more Machiavellian than others, but none of them would see themselves as being like that to a fault.

I'd say my novels are intended to be like a black and tan beer insofar as the lighter action fare is meant to accompany and complement the headier aspects of the story.  I never want to beat people over the head with the themes in my stories.  In fact, I'm not sure most readers even notice the underlying themes.  And that's fine.  My primary goal has always been (and will continue to be) to entertain.

Hemlock and the Dead God's Legacy is about midway through the editing process.  I am still shooting for a 4/1 release.

Posted by B Throwsnaill at 3:58 PM