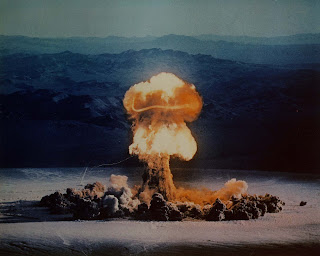 
This is one of the longest words in the english language according to the Oxford dictionary.  What does it mean?  It was a word coined to describe the political position of being against the disestablishment of the Church of England.  Some people must really have despised this political position to christen it with a name that weighs in at a hefty 28 letters and 12 syllables!  Maybe the thinking went something like this: "This is such a reprehensible example of a scoundrel that we really can't make due with an ordinary term for them."

My friends and I used to goof on this word in high school.  It was the perfect weapon in the arsenal of a bunch of nerdy guys whose conversation probably closely followed a bad script from an episode of Big Bang Theory.  We appreciated the epic feel of the word and the fact that it oozes a sense of the intellectual elitism that we believed we were engaging in.

But I think this word may still be relevant today (above and beyond its intrinsic relevance since the Chuch of England is still the official national church).  The Indie book movement seems to be gaining momentum along with the "democratization" of other forms of media.  The centralized management of the publishing house and the content filtering done by a few select people is giving way to easy online publishing, and robust, web-based collaborative filtering of ebooks.  But there are still nay-sayers out there.  If you take a moment to look, you can easily find some article or blog disparaging indie authors as nothing more than a shouting bunch of vainglorious hacks whose work should be cast aside without a glance in favor of the "real" books vetted by the traditional publishing system.

These people need a word for their backward thinking--a word that carries the same weight and gravitas as antidisestablishmentarianism.  I present to you AntiDemocratizedContentAndCollaborativeFilteringistism.  The next time one of these supporters of the old status-quo engages with you, just drop that term in conversation and sit back and watch the fallout from the mental mushroom cloud that is certain to follow.

(Note that I don't actually have (or intend to express) a position on disestablishmentarianism.  Use of the term represents the exercise of artistic license for rhetorical effect.)

Posted by B Throwsnaill at 4:56 PM